Change Management is crucial to your Outsourcing Initiative

Why Change Management is crucial to Outsourcing

Outsourcing of your Facilities Management introduces a new relationship and a new culture into an organisation. No matter how positive both parties feel at the beginning of the process, unless specific steps are taken at the outset to properly manage the transition of the agreement and the transferring of employees, the inevitable challenges that will be encountered during the first year will slowly creep in and have the potential to become highly emotional issues that could destroy the relationship.

In any outsourcing deal, when things begin to go wrong the first inclination is to look at the contract, focus on processes, tools, technology and SLA’s before turning to the more emotional topics, we have all done it. However, if the softer issues around employee engagement and change management have not been dealt with it is these powerful social and emotional factors that will in all likelihood jeopardise the intended outcome.

Outsourcing is not new, in fact it has existed for thousands of years in one form or another. For example, people have outsourced their money management to banks for centuries. We all rely on local governments to manage city infrastructures and very few people today supply their own energy.

If outsourcing has existed for so long, why has it suddenly become so controversial today? Media stories abound about the evils of outsourcing many of which fuelled the fire of the #outsourcingmustfall campaign. However, many of the examples that are touted are either factually incorrect or as modern parlance would describe them ‘fake news’.

Outsourcing has matured during the past 20 years and at the heart of the resistance is that however it is formulated, outsourcing has an impact at an individual level and as such is likely to be charged with emotions. Many of these impacts are in fact positive but like most good news this doesn’t make the headlines.

If both the Client organisation and the new service provider are unable to reassure their respective organisations by anticipating and responding to such concerns, the outsourcing is unlikely to deliver the transformation required and indeed is at risk of significant losses in productivity, market share and project expenses and potential failure at a great cost to both the Client and service provider.

Outsourcing affects individuals whether the activity is shifted next door or around the world. It is important therefore to create an Employee Value Propositions (EVP) that appeals to the affected workers.

Most developed countries have comprehensive labour legislation in place. In South Africa we have Section 197 of the Labour Relations Act to protect the rights of transferring workers, but these are Human beings with concerns and emotions. Despite the legal protection, individuals fear eventually losing their job and people in this situation will find it difficult to contribute to the success of the project if they believe that success of the initiative will result in their unemployment.

It would be simple to say these individuals need reassurance that their position will not disappear, but this is to oversimplify the situation and to underestimate the change process.

Tsebo engage in detailed and in-depth change management initiatives conceived and conducted by our resident Industrial Psychologist. Sessions are provided as part of the change management initiatives. Staff are taken on a journey that provides them with the need for change and provides them an understanding of the vision, objectives and what success will look like going forward.

These sorts of initiatives are difficult enough inside an organisation where levels of trust have been built with staff members over the years. In this instance, we are dealing with individuals who have no connection or relationship with the incoming service provider and are probably sceptical if not outright scared of the motives behind the change. This presents particular problems that need to be addressed in the transferring process.

It would be naïve to suggest that the process of transferring employees has not been used and abused by both suppliers and clients alike over the years.  At Tsebo we have had instances where we were instructed by the Client to dismiss many of the transferring staff due to them being incompetent. Whilst a degree of retraining is almost always required, rarely do we find that the transferring employees are utterly unfit for purpose. The facts are that these individuals have rarely been invested in, trained and performance managed prior to the intended transfer. Outsourced service providers need to be alive to the fact of being used as the scape goats and a proxy for poor management and engagement of the employees under their management prior to the outsourcing.

When confronted with our resistance to this move as both illegal and unethical we have almost always managed to resolve the situation without any employee losing her job or benefits. This is an extreme example but the outsourcing of a troubled function, due to poor performance administration, to satisfy an otherwise failed management agenda is not uncommon.

The situation with regard to competitive tendering does not assist in the harmonious transfer of employees either. Price dominated competitive tendering in an outsourcing context is akin to a medieval slave market, auctioning off the transferring staff to the lowest bidder. This course of action is fraught with dangers, both in terms of securing the ongoing rights of the labour force as well as the reputation of the customer for the insensitive behaviour with which it treats its staff. None of this gives the business of outsourcing a good name.

Regardless of the terms under which they may have been transferred an employer of choice has a moral obligation to their staff to ensure their ongoing needs are met by and that their potential future careers are advanced with a reputable organisation.

A great article in the FM-World entitled Schools of Thought raises the issue of the potential career path differences between in and in-house operation as opposed to an outsourced operation. It is an interesting debate and perhaps unsurprisingly I side with the argument that from a professional development perspective, outsourced entities have a better track record of investing in and developing their people as they are core to their business. Unfortunately, in-house non-core personnel tend to be last in the queue for the ever-decreasing training budget.

In the outsourcing scenario it is critical for a successful transformation that the incoming service provider gets to collaborate in a pre-contract situation with the transferring management and employees in creating the new outsourced entity. By working shoulder to shoulder with these people, who are aware of the current conditions and issues in delivering a service to the customer, the new service provider is better able create an enhanced performance-based solution against which there is a substantial reduction in the risk of service interruptions and there can be no excuses for non-performance.

If one acknowledges that ‘people buy people’ then authentic engagement with the transferring staff is in the Clients best interest. The process facilitates collaboration, ownership and commitment and reducing concern thereby helping to secure the transfer smoothly and effectively. This in turn enables the service provider to better warrant no disruption in service to the client.

This enhanced ‘buy in’ is difficult to achieve in the adversarial pantomime of cost based tendering and the likely resultant lack of acceptance from the staff which may undermine the outsourcing causing it to fail due to a lack of commitment from the people. Furthermore this scenario provides the partner with a ‘probable’ escape clause, which would diminish the contractual obligations of the partner and the ability for the customer to hold them accountable for non-performance.

In these extremely challenging times, we would like to share our heartfelt support and solidarity with you and your families. At Tsebo, the health and safety of our colleagues, customers, partners and the communities in which we operate is our number one priority. We have a nearly 50-year legacy of providing responsible workplace management solutions and we are committed to doing all we can to keep everyone safe.

As governments around the world are implementing measures to contain this public health crisis, we have been taking strict precautions to protect our colleagues and their families, while securing customer service. Various businesses in the Tsebo family, are considered essential during times of crisis as we form part of local food supply chains, the security industry, as well as a critical player in public health and hygiene. Furthermore, we have extensive contingency plans in place securing our supply chain and ongoing businesses.

Tsebo Solutions Group established a joint Crisis Management team that meets daily to monitor the COVID-19 situation. This committee is in daily contact with the relevant government agencies and public health authorities to ensure we are informed to take the necessary decisions and actions. We have been proactively implementing a range of precautionary measures, from stringent sanitation and cleaning protocols, to workplace distancing, work-from-home policies and international travel bans. For more information on Tsebo’s response to the virus, business contingency plans, preventative educational campaigns to minimise the spread of the virus and more, please visit Tsebo’s:

Please note that Tsebo has established an email address Assist@tsebo.com which is available to our customers as one central channels of communication for any request or enquiry. The emails are received by Senior Management who ensure that requests for assistance are actioned as soon as practically possible.

In closing, we are here to support you. Please don’t hesitate to contact us should you require any help or assistance.

We use cookies to provide necessary site functionality and improve your online experience. The information collected does not usually directly identify you and declining cookies will not deny you access to any of the information on our sites. For more information, please refer to the ‘Use and Management of Cookies’ section in our Privacy Statement

This website uses cookies to improve your experience while you navigate through the website. Out of these, the cookies that are categorized as necessary are stored on your browser as they are essential for the working of basic functionalities of the website. We also use third-party cookies that help us analyze and understand how you use this website. These cookies will be stored in your browser only with your consent. You also have the option to opt-out of these cookies. But opting out of some of these cookies may affect your browsing experience.
Necessary Always Enabled
Necessary cookies are absolutely essential for the website to function properly. These cookies ensure basic functionalities and security features of the website, anonymously.
Functional
Functional cookies help to perform certain functionalities like sharing the content of the website on social media platforms, collect feedbacks, and other third-party features.
Performance
Performance cookies are used to understand and analyze the key performance indexes of the website which helps in delivering a better user experience for the visitors.
Analytics
Analytical cookies are used to understand how visitors interact with the website. These cookies help provide information on metrics the number of visitors, bounce rate, traffic source, etc.
Advertisement
Advertisement cookies are used to provide visitors with relevant ads and marketing campaigns. These cookies track visitors across websites and collect information to provide customized ads.
Others
Other uncategorized cookies are those that are being analyzed and have not been classified into a category as yet.
SAVE & ACCEPT 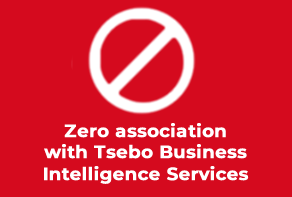 Tsebo Group is aware that a company that trades as Tsebo Business Intelligence, has been named in the Zondo Commission of Inquiry and related media articles.

The Tsebo Group, its subsidiaries, directors, and executives are in no way associated with Tsebo Business Intelligence Services.